The Influence Report: How Do Klout and Kred Measure Up?

This is part two of a three part series on Influence scoring by Douglas Crets. You can read the first part here.

Klout and Kred are actually housed in the same building in San Francisco. Shawn Roberts, director of Marketing & Communications for PeopleBrowsr, says there’s no strong competition. Kred values what Klout brings to the table.

But for the purposes of this article, let me say that Kred is differentiated from Klout, implicitly, by this extremely descriptive and pointed approach to showing that influence and credibility is not some design of the web and the way people interact on it.

They fill their site with pages of explanation about what Kred means, how it is measured, who can get it, and how they can obtain it. But they distinguish themselves explicitly from Klout in how they describe and inform – even instruct – consumers on how to get this.

They split impact online into Influence and Outreach –which they say is a measure of generosity online (from the Kred Guide):

“Kred offers separate metrics for Influence and Outreach.  Getting and growing Kred starts with relevancy, interaction, and engaging and sharing content with communities. Kred Influence measures a user’s relative ability to inspire action from others like re-tweeting, replies or new follows.

Kred Outreach measures generosity and rewards actions like engagement with others and willingness to spread the message. “

You can see the measure of my influence and outreach in my profile avatar. I have an Influence Score of 743 out of 1000. I have an Outreach score of 8 out of 10. According to the Guide and other writing on the Kred site, Outreach is harder to accelerate through to higher numbers. 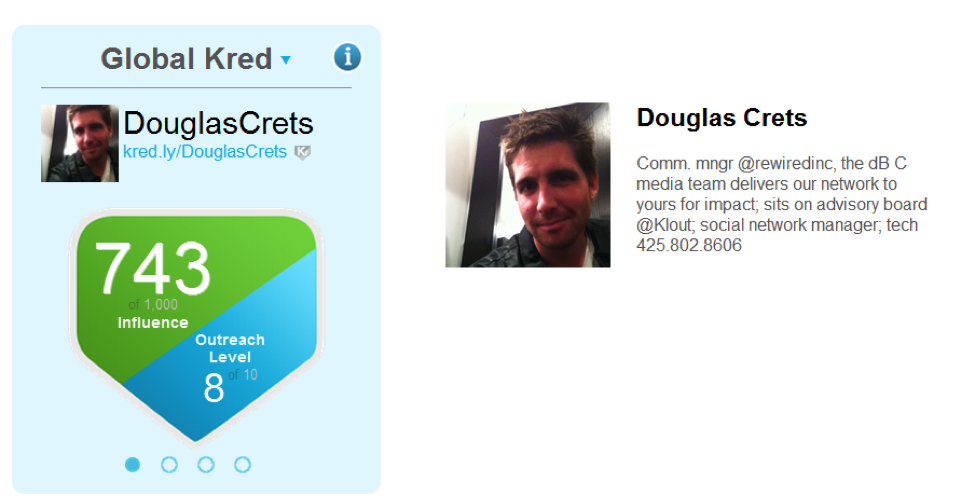 A cursory glance shows the evaluator of the two types of influence measurers that one, Kred, is coming from a more rooted sense of the ideology of influence. Klout, on the other hand seems more wedded to the agencies and consumer brands that they are trying to serve through their high numbers of influence seekers.

Kred falls on the clearer side of the transparency gauge. They have taken time to include precise graphs showing the levels of influence and how those point systems are arranged.

Here are some of those graphs and numbers. 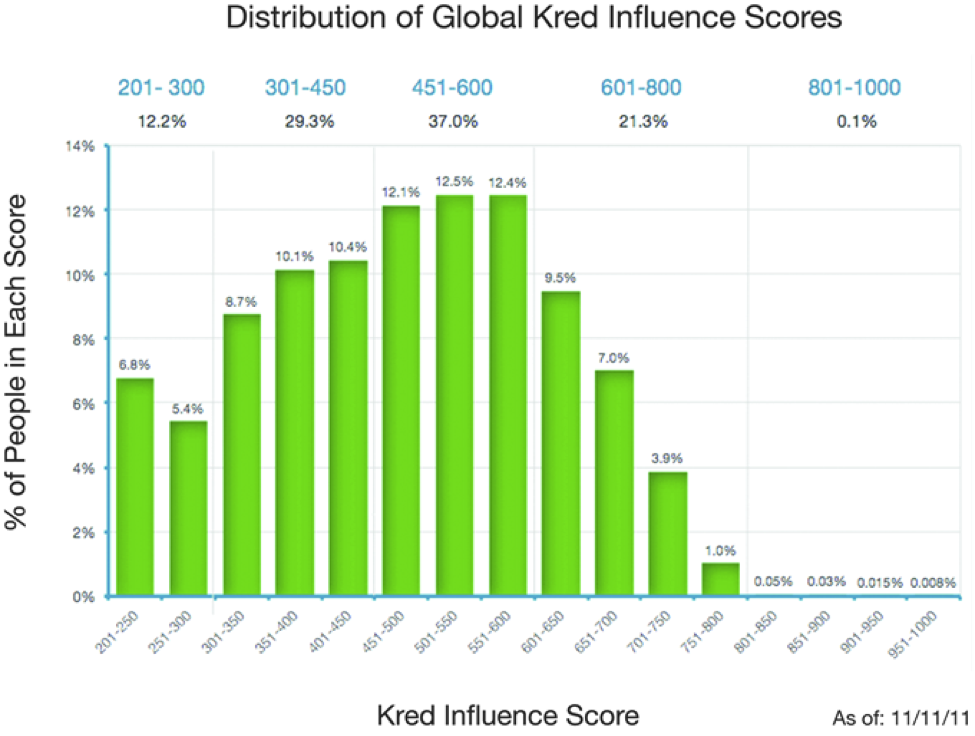 But the more interesting one comes on the same page, here. 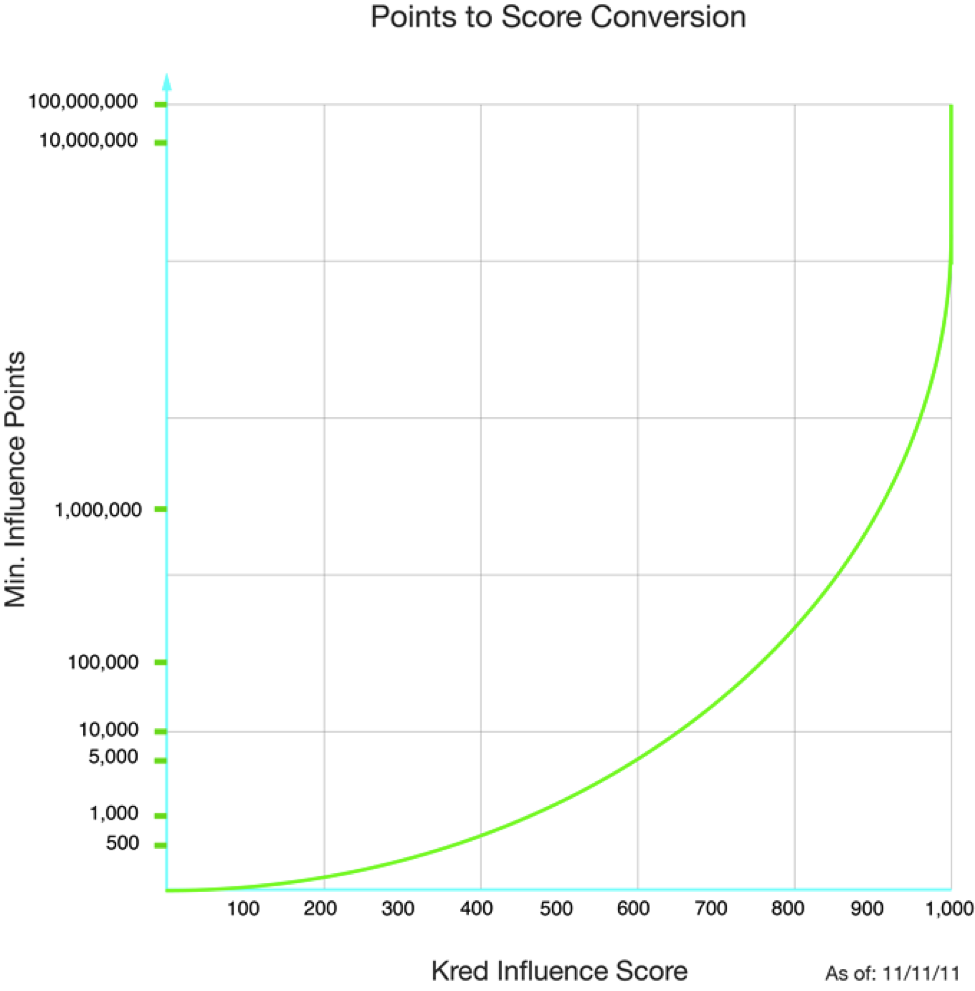 this shows you how hard it is to rise in influence.

The fault here, though, is that if you look through all of the Kred material, there’s seemingly no incentive for trying to win in this system, or trying to gain more and more influence.

Again, Kred comes from an almost strictly ideological position, that influence and generosity are just inherently good and that, apparently, one should pursue high scores in that area because people want to interact with people who want that, too.

Klout started out only measuring Twitter. Back then it was easy. Tweets, RT’s, number o followers, number of followers reading and reacting and creating conversation.

I asked Megan Berry for some numbers and information that might give us a deeper dive into how all of this data is coming together, but the answers leave us knowing about the same.

Here are my questions, and her answers:

Klout has worked quite successfully, to create a more global picture of credibility and influence and it really does have the market on how people perceive social media influence scoring and the outcomes and benefits brought along by participating in attempts to raise one’s personal scores.

But when looking at Klout, one is struck by how much complexity they are trying to work through to create something simple. It can’t be easy. A typical profile looks like this:

That’s eleven different networks on mine. I believe they have about twelve to sign up through right now.

It’s no wonder that it’s entirely hard to game this system, or to understand how it works. It is quite possible that there are no universal networks, and no universal types of behavior that can allow one to draw parallels, similarities or patterns in achieving this influence, not just through each network, but through the lens of using the Klout score.

It’s Like Taking A Subway, or as Heraclitus Might Say, You Never Step In the Same Subway Car Once

It’s a metaphysical problem of identity and the fluid dynamics of interpersonal and one-to-many interaction.

Think of it like riding a subway. Think of it in terms of train-hopping, but you are hopping from country to country.

There are subways in Washington, DC, Berlin, Tokyo, Hong Kong, New York City and in Beijing, but if anyone has traveled on all of these methods of public transport in any of these different cities, it is very true that you never get into the same subway car once.  Each uses a different payment system, and currency. Each looks different. Each has different kinds of cars.

The Hong Kong MTR, for instance, has wide open cars with no doorways separating compartments. You can literally walk from one end of the train to the other.

The New York City’s MTA, well, if you have been there, you know, not even the same trains exist for the different lines.

How you travel on the web is the same way. From a marketing aspect, this must be a nightmare, and Klout offers such a clear cut solution.

It’s a score. It’s easy to see. And it’s generally apt, if not always accurate.

Social Media Subwaying: Different languages, different types of doors, different advertising messages, different announcement systems, different ticketing systems means that there is no universal subway ride. It’s always going to be different.  Of course the solution would come from outside. Klout is first to the race, and I think they will be the one that actually becomes a public company.

The third and final blog post will be published next Monday. Follow our RSS Feed for the latest in Pivot stories and research.