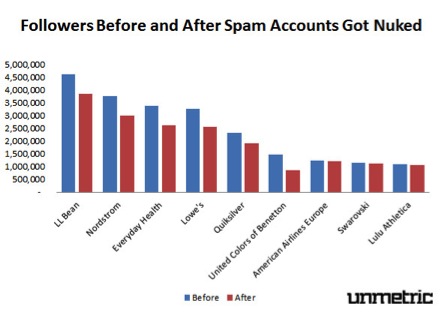 The interwebs was abuzz earlier this month as Pinterest wielded the dreaded axe of spammer death, banishing spam accounts in droves. With this new effort, Pinterest is fine-tuning an algorithm to detect spam accounts before they’ve ever been created.

Since Pinterest opened its doors on August 2nd, massive consumer success has prompted brands to follow. Brands flocked to the social network to showcase their beautifully designed kitchens, furniture in kitchens, utensils in kitchens, cute animals in kitchens and currently, Christmas decorations in Kitchens.

Now, Pinterest has made an attempt to delete these fake accounts. Some claim it a bloodbath, but the fact of the matter is that it has only affected the largest brands. While the industry perhaps is beyond the whole buying followers thing (or at least, most countries have), Pinterest is most concerned about spammers posting misleading, offensive or just downright junk content that your poor old Mom might click on.

The chart below shows the most popular brands on Pinterest that have over 1m followers. Brands with the most followers before the purge lost more fans.

The biggest loser was L.L. Bean, which lost a staggering 760,000 followers. However, as the graph below shows, it only took about 36 days for L.L. Bean to gain the 760,000 followers that it lost. After just a few days, L.L. Bean has already recovered nearly 40,000 followers, so not the end of the world then. 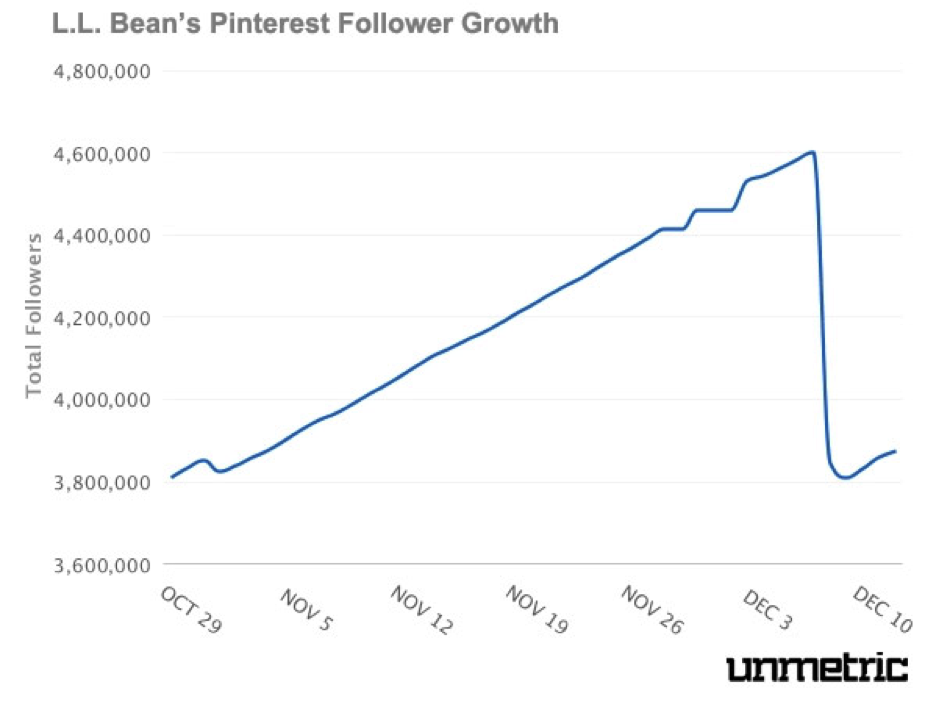 In terms of percentages, most of the 1m+ follower brands lost an average of 20% of their followers, although brands with fewer followers lost a much smaller percentage. The social media team at United Colors of Benetton must have woken up on the Friday and wondered what had happened as they lost 40% of their followers. 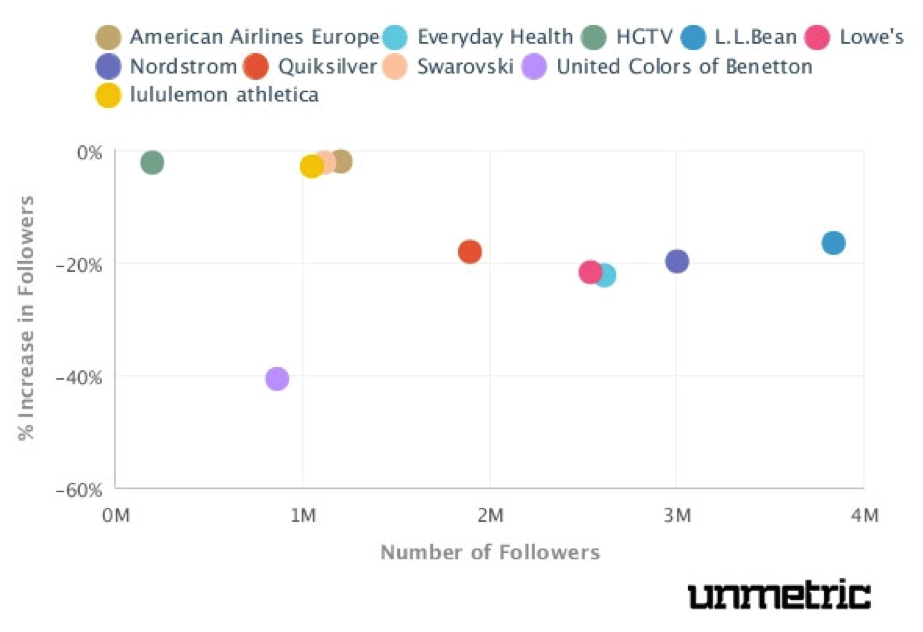 It’s surprising to see that just the most followed brands saw losses. When compared to brands with between 50,000 and 1m followers, the losses were minimal, as the chart below shows. Most brands in this category actually increased their followers. 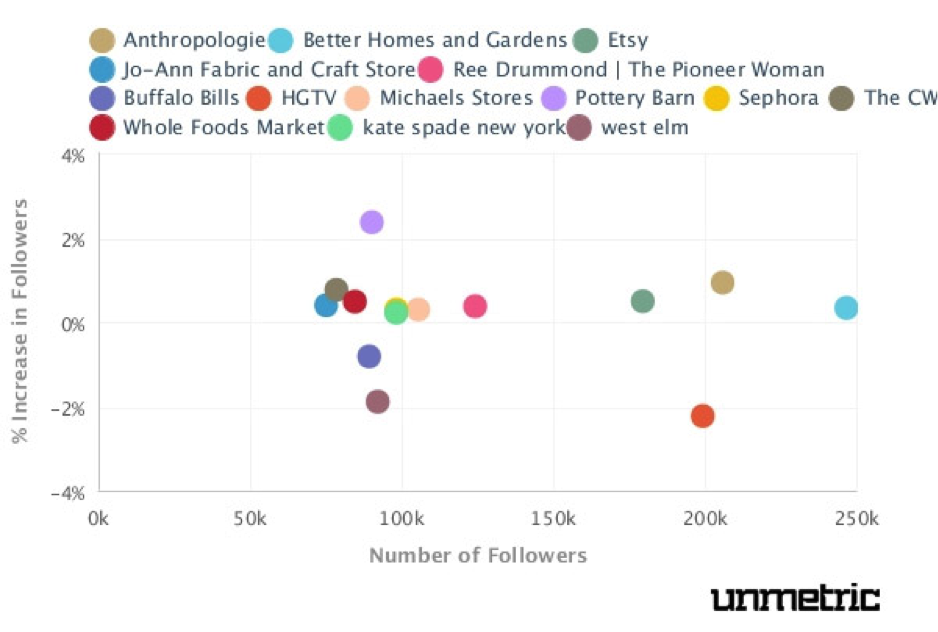 Brands with less than 50,000 followers were even less affected by the Axe of Spammer Death. These brands all managed to increase their followers. 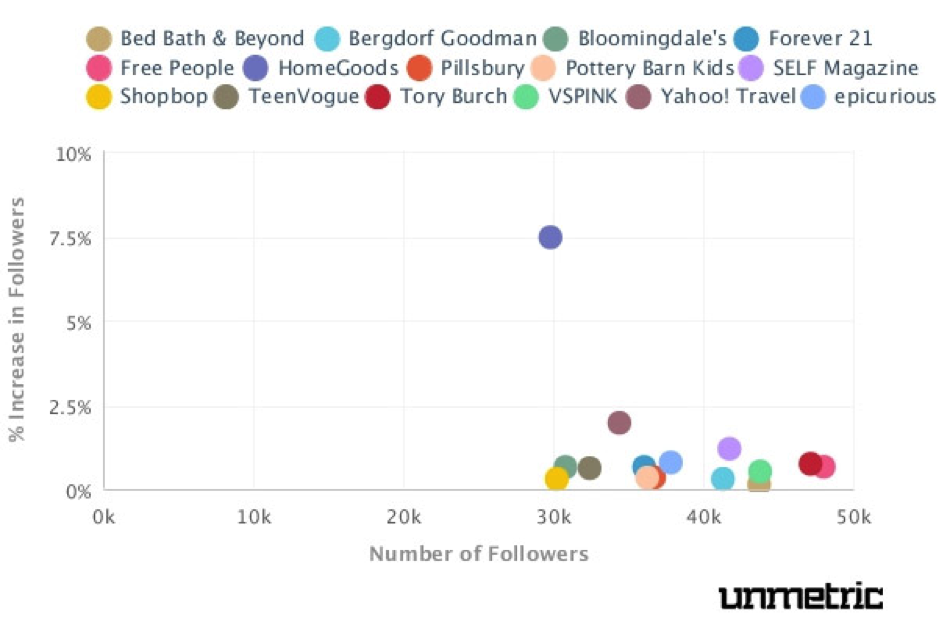 All in all, a very good move by Pinterest. It looks like they’ve removed close to 1m followers. We don’t know if this is the end of the current purge, but given how few brands have lost followers, I wouldn’t be surprised if we see a Pinterest Axe of Spammer Death II sometime in 2013.