How Patagonia Uses Social to Protect the Planet [Case Study]

Since its inception, Patagonia has been a brand with purpose. It has made bold decisions to protect the environment and encourage consumers to reduce their carbon footprints. In 1972, when founder Yvon Chouinard realized his climbing equipment was creating rock damage he made a risky business decision to phase out the popular gear and introduce an environmentally friendly alternative through the launch of Patagonia’s first catalog. More recently, in December of 2011, they ran a full-page ad in the New York Times discouraging consumers from purchasing one of its jackets because it took so much water and energy to make.

Now, in a world of constant connectivity and increasing social media activity, how is this purpose-based brand pushing to new heights to promote environmentalism and extend its footprint?

Patagonia is driving expressions, not just impressions. Its recent campaign, I Vote the Environment, uses a social strategy that deepens consumer engagement at every brand touch point – in store, on-line, through channel partners and mobile. With a goal to encourage buzz about environmentalism and increase civic engagement, Patagonia partnered with Mass Relevance, the popular band Wilco, and non-profits HeadCount and the League of Conservation Voters to get people to share what they love about the environment – all while building brand affinity and engagement. As a bonus, the campaign includes a voter registration drive in time for the November elections. 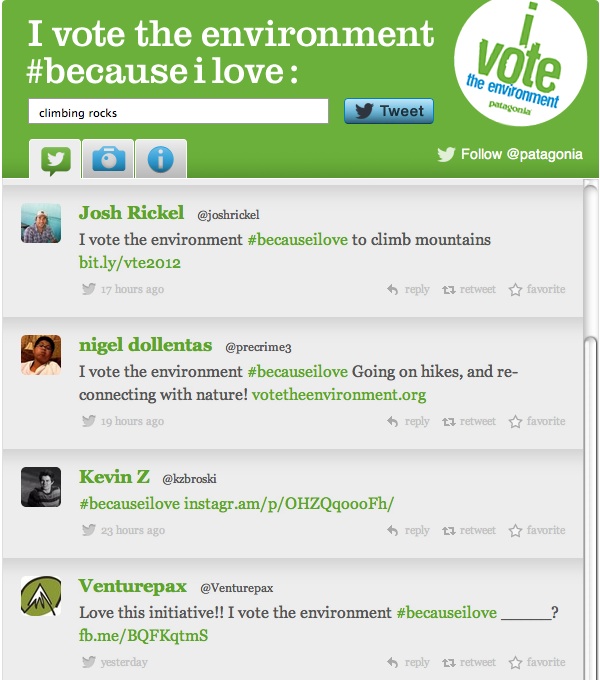 During Wilco’s most recent concert tour, Patagonia is using Mass Relevance to allow fans to Tweet why they love the environment onto the screens flanking the stage for thousands to see. Using the hashtag #becauseilove, consumers were encouraged to share their favorite places and environmental causes which were also shared through social integrations on Patagonia’s, Wilco’s and HeadCount’s website. 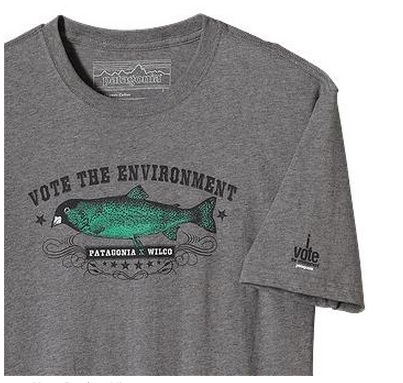 The campaign continues inside Patagonia retail stores, where customers can instantly Tweet-to-screen while shopping. The brand’s multi-dimensional approach across digital, social, and physical destinations has helped empower consumers to rally around a common cause and deliver conversations that will prepare them for the upcoming election season.