When a crisis emerges, it’s important for brands to learn and build from that experience. Charlene Li discussed two great examples during her webinar last Thursday. Download her slides or catch the full replay here.

In 2009, Domino’s employees posted a disgusting video of what they did to pizzas before delivery. The video soon went viral. The company’s initial response was limited with a small social presence – a release on the website, a video from the CEO and a makeshift twitter feed to respond in real time. But more importantly, the company took this experience to heart and developed ways to improve their customer relationship.

Domino’s spent months getting feedback from surveys and focus groups, and decided they needed an entire product overhaul. They created “The Pizza Turnaround” campaign to market their new pizza. Not only did they push this campaign on social sites, but searched for creative ways to truly engage. Domino’s showed social media feedback on a billboard in Times Square, asked people to snap pictures of their pizza, and even created an innovation hub. 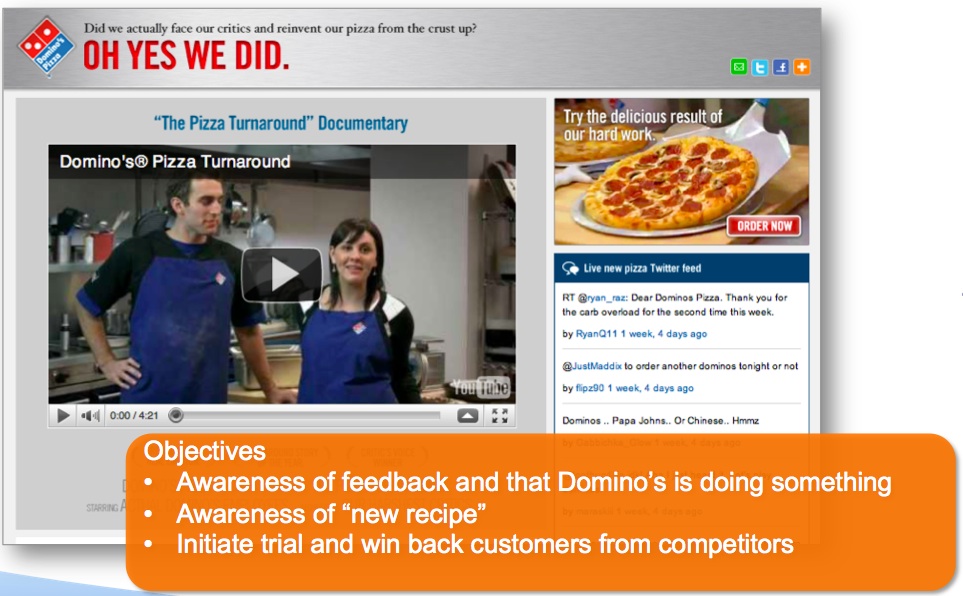 And it worked. Sales increased by 14% in that first quarter and profits doubled.

Transparency = Trust = when things go wrong, consumers are much more likely to forgive and stay with relationship. #pivotcon

Embrace imperfection to be authentic #pivotcon

In 2006, Dell was just starting in social media when one of their computers spontaneously caught on fire, and the accompanying video went viral. The chairman of Dell at the time released a very transparent blog post telling their customers they did not yet know what the cause was. Customer reaction to this post was overwhelmingly grateful for the honesty.

After this experience, Dell created a strategic, transparent infrastructure to develop better relationships in the future. They reached out to bloggers like Jeff Jarvis who had previous bad experiences with Dell, and asked for ways to improve. In 2011 they even launched a social media command center powered by Radian 6. With a tactical focus on listening, they invested greatly in empowering their employees to engage with customers on the social web.

1/3 of all Dell employees are trained on social media literacy, over 4,000 are certified to engage with customers #pivotcon

How would you have approached these crisis differently? What ways do you engage your customers to make your brand transparent?

Our next webinar is on June 20th with Brian Solis, space is limited. He’ll be discussing our conference’s theme: From Social Brands to Social Business.

For more information on our webinar series or for sponsorship information, please contact Alice Myerhoff.