In 2011, dressbarn, a specialty women’s retailer that aims to inspire and empower women to look and feel beautiful, sought to change customer perception as an unfashionable brand and increase its desirability among women of all ages and sizes, while unifying its messaging across all channels with engaging consumer messaging. In order to accomplish these objectives, dressbarn needed an overarching strategy that would encompass campaigns throughout the year that would connect and resonate with customers.

The retailer created a seasonal mix of engaging campaigns that were executed during the Fall of 2011 and the Spring of 2012. The goals of the campaigns were to increase customer engagement, retain current customers, attract new customers and highlight dressbarn’s commitment to charitable organizations and causes. Each of dressbarn’s unique campaigns stressed the importance of celebrating womanhood while connecting with, honoring and cherishing the females in our lives. The campaigns encouraged customers to participate and celebrate women through interactive programs, while the strategies drove dressbarn’s customer base to the website and simultaneously stimulated traffic to social networking sites.

The Fall Preview campaign introduced a QR Code and Landing Pages, seeking to gain customer engagement through use of QR codes from direct mailers and a coupon. Landing pages were chosen as the platform for users to share the site and coupon with their friends. The measurement of success included increasing customer engagement, driving traffic via QR codes and social sharing. 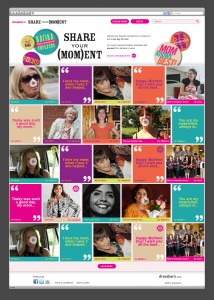 The Pink Pledge Brand Ambassador Program encouraged women to take the PINK pledge by living a healthy lifestyle and sharing it with others via social networks. This would emphasize dressbarn’s commitment to their customers’ health through a breast cancer awareness promotion. We designed and developed a website and a mobile WAP site where users could upload their pledge or breast cancer story of strength. The Brand Ambassador program was also instituted in 4 markets (DC, Chicago, Sacramento and NYC) and ambassadors encouraged passerbys to take the pledge through the use of a mobile site optimized for iPad. The success of this campaign was measured through the number of pledges, the increased customer engagement, social sharing and the viral spread of the campaign.

dressbarn’s objectives for the Our Favorite Things Holiday Promotion, was to retain & engage current dressbarn customers, while also attracting and acquiring new customers by encouraging the existing base to spread the campaign virally through shares and likes. An interactive Facebook application was chosen where users posted what puts them in the holiday spirit for the opportunity to win daily giveaways. The measurement of success included increased interactions (likes and shares), increased impressions, number of entries and fan acquisition.

To Mom With Love 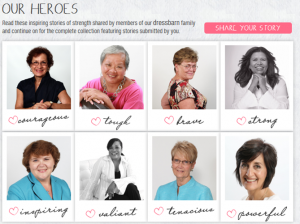 To Mom With Love was created to show dressbarn’s commitment to women and charitable causes. It aimed to help underprivileged families via a cause marketing campaign and brightened the lives of local children and mothers. A multi-platform site (web, Facebook and mobile) was created for users to upload their idea of a MOM-ent((a photo, video, or written memory of anyone who has ever given them a warm and fuzzy “mom-like” feeling), vote and share with others via social networks. Users had the opportunity to win a spa day for two for having the most votes.  For every MOM-ent shared, one dollar was donated to allow underprivileged children purchase mother’s day gifts with dressbarn gift cards. A PR outreach in designated markets to focus on the heart strings aspect of the campaign. This included handouts at P.O.S., fitting room decals, receipts/cash wrap, all related signage and associate Involvement. We measured the success by an increase in customer engagement and the dollars donated to charitable organizations.

dressbarn’s Facebook fanbase grew from 146,624 to 668,617 within a six month period. Customers took advantage of utilizing features of the campaign Conversation created, such as mobile apps and QR Codes that linked to contests and giveaways. Users spent nearly three minutes engaged with the site during the Fall Preview while video footage from events spread virally through YouTube. Results from the “Pink Pledge” campaign showed that the main website and mobile site received 47,239 page views during the campaign. “To Mom With Love” generated 22 print stories with a circulation of 1 million plus, expanding consumer reach. Overall, the campaign results proved that customers were driven to interact with dressbarn’s vision, beyond the focus of product promotion. dressbarn’s Embrace Beyond Engagement campaign went on to receive the 2012 OMMA award for Integrated Online Campaign in the Retail category.