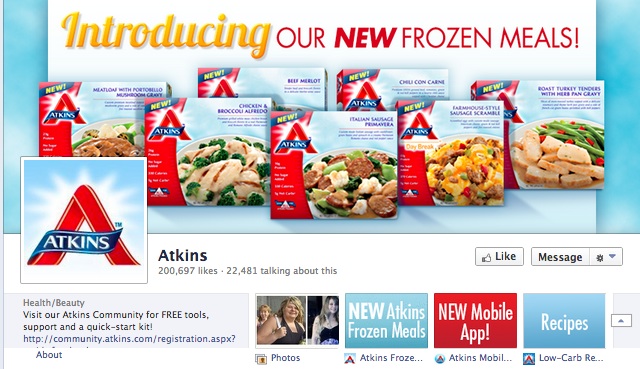 Since joining Atkins in 2011, Scott Parker has been instrumental in reinvigorating the brand, helping to frame brand image and build community around a healthy lifestyle. We got a chance to sit down and pick his brain on what their Social media team looks like, the company’s top-performing Social channels, and their choice to launch a product line on Social:

What made Atkins realize that Social initiatives were going to be necessary to the brand’s progress?

We knew from the start that social media is not only powerful and cost-effective but, when used strategically, can also provide a level-playing field for us against companies with much higher marketing budgets. Social media allows us to build a relationship with each individual consumer to help guide them through their weight-loss journey, a feat that would be nearly impossible through traditional marketing tactics. Social has played a pivotal role in growing our consumer base by simply introducing and instilling the fundamental principles and benefits of a low-carb diet to those in need of change. We leveraged social media not only to reach new dieters/followers but also to educate, inspire and support current ones, increasing our credibility and their loyalty.

Which Social networks have proved most valuable to Atkins?

Facebook and Pinterest have been most valuable and benefit our brand in different ways. Facebook has provided a common ground and easily accessible platform for anyone on the diet, new or experienced. Dieting is a very emotional process and can leave people feeling vulnerable and lost. Our Facebook community has become a place where anyone can ask questions and receive answers immediately from peers or Atkins Nutritionists. It is where our members come for support and encouragement along their weight-loss journey.

In 2012, we consistently ranked in the top 3 for highest fan engagement rate against diet competitors. We accomplished this by providing relevant content that keeps fans wanting to come back for more. Additionally, we had the highest fan growth percentage rate amongst all diet competitors for the entire year. 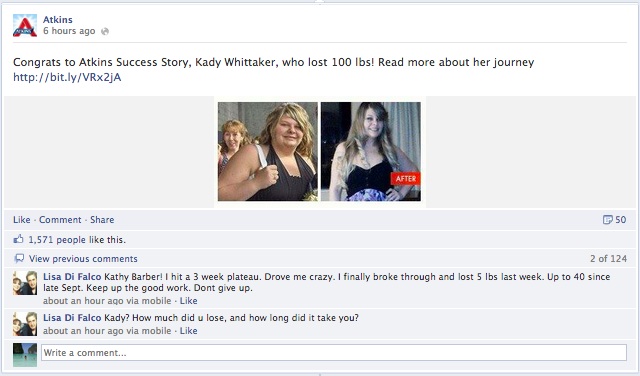 The visual nature of Pinterest made it a perfect platform for Atkins to not only bust the “bacon and eggs diet” myth that so many people had false preconceptions of, but also to promote the variety of foods you can eat on Atkins. With over 1,600 recipes in our database, we started posting on Pinterest and our number of followers began to grow. We currently have over 20,000 Pinterest followers, which is roughly 19,500 more than our closest competitor in the diet realm.

What was your most successful Social media campaign and why?

Recently, we launched a new Frozen Meals line largely driven by online and social media campaigns. We knew that the best strategy would be to excite our current followers and biggest advocates first and foremost, who would then spread the word to their friends, family and social networks. As part of the campaign, we launched a like-gated Facebook tab and gave away a Los Angeles Getaway to meet our celebrity spokesperson. The prize included luxury hotel accommodations, first class airfare, meals and transportation, $1K in spending money and most importantly, lunch on us for a full year (365 coupons for Free Atkins Frozen meals).

In just 3 weeks, the campaign resulted in over 31K entries, 30K increased Facebook likes, and had a direct impact on sales. Today, two of the nine frozen meals released are in the list of top ten best sellers at our largest retailer. The campaign’s success can be attributed to three things: a great giveaway, low barrier to entry and the power of personal recommendations via social media.

Our team consists of one Social Media Manager, an online graphic designer, three moderators and an agency that handles analytics. We have seen firsthand, how valuable social media is and look forward to growing our team in the upcoming year!

Enjoy this interview? Learn even more Social insights from McDonalds and Tropicana in our February Food Month Brand Series.

About Scott: Scott Parker is a highly experienced marketing executive who brings a wealth of knowledge in the diet industry to Atkins Nutritionals, Inc. He’s worked toward helping the consumer understand that Atkins is a life-long way of eating that leads to quick, satisfying and proven weight loss – not just a diet. Parker has also led marketing organizations at Bath & Body Works and Dial Corporation, with earlier experience at Procter & Gamble and Frito Lay.