I just listened to not just one song by a musician I had never heard of before, but a few dozen. This new-for-me music came to my attention because a friend was listening to a song on  Spotify and I noticed it in my Facebook feed.  After I clicked on that song, I fell down the rabbit hole of music.

Several different elements of social media technology were at play: Facebook’s Timeline, the Spotify app integrating with Timeline, and finally, the way in which information is linked within Spotify. 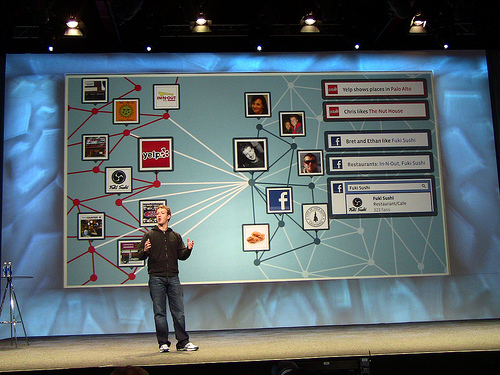 Back in September 2011 at Facebook’s f8 developers’ conference, the launch of both Timeline and Open Graph was announced. Together, these two enhancements to the Facebook platform meant that information from third party sources and applications could be fed into a user’s timeline, and thus become part of that person’s story. Or, as Mark Zuckerberg said, “It’s how you can tell the whole story of your life on a single page.”   Read an article on New York Times, listen to a piece of music, or run a marathon, and the details are now shared with your network instantly.

Social media communications have often been structured by thread or topic. Timeline goes a step further and provides a meta-structure to social interactions.  Within that larger structure, conversations may still be attached to a post, but now there is a deeply personal framework around all of that chatter. As more applications become available that share information on the Timeline, people will be sharing more and more information. 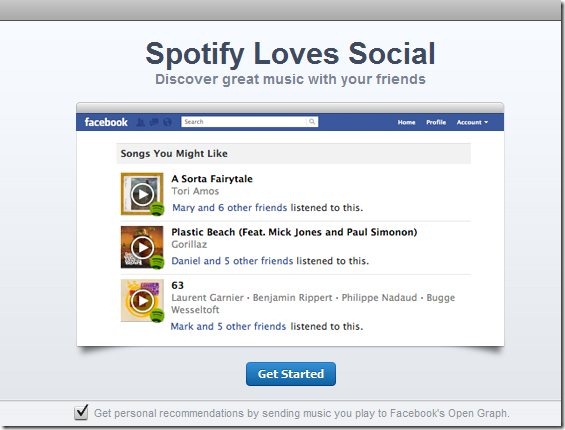 In his seminal book Getting A Job, sociologist Mark Granovetter wrote about notions of “strong ties” and “weak ties.”  A strong tie is someone in our immediate network – our family or immediate circle of friends – whereas a weak tie is someone connected to someone connected to us.  Granovetter demonstrated how job seekers are more apt to hear about a job opportunity through a weak tie, as it is through more distant connections that a person is more likely to hear about new information.

The same holds true for music. The individuals that make up our immediate circles have had many opportunities to share their musical interests, but when a person who is not directly connected with us enters our sphere, they often bring other cultural knowledge along.

Spotify, like the other streaming music services Pandora and Grooveshark, also has elements embedded in the application that show users related music.  I’m listening to Kelly Joe Phelps, and Spotify tells me that a similar, related singer might be Eric Bibb. In many ways, this is simply an extension of hyper-text — connecting one piece of information with another much like the recommended purchases made infamous by Amazon.  When Vannevar Bush wrote his now famous 1945 Atlantic Monthly article As We May Think, he suggested that there might be a way to connect one microfilm with another, a piece of text, or an audio recording.  While Bush was thinking in the terms of the media of his day, the concept of connecting information was the prescient element.

Just as in architecture, urban planning, and even web design, there are definite patterns emerging in social media.  I say emerging, as it seems with each new successful social platform we’re witnessing novel elements – some of which help to spur on even more social connectivity while others fall to the wayside. For instance, what is it about the curation of images on Pinterest that has caused that platform to be one of the fastest growing social platforms of 2012?

Elements of social platforms will combine to create even new and more effective means for the proliferation of knowledge. With the sharing of music on Facebook, for instance, there is the meta-structure of the Timeline, plus the sharing or syndication of personal information made possible by Open Graph, and finally, the hyperlinking of related information within Spotify.

These social technologies are gaining ground first within the realm of the personal – in this case, the sharing of music. The patterns displayed here could become ways that people share other knowledge, such as medical information or philosophical concepts. By recognizing and studying underlying patterns, developers of social platforms, marketers, and others could uncover ways of diffusing information  that we’re not yet able to imagine. 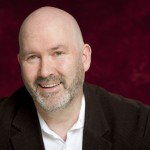 Ric Dragon (@RicDragon) is the author of the DragonSearch Online Marketing Manual and Social Marketology (McGraw Hill, June 2012). He is a regular presenter at Google’s Get Your Business Online, and has been a featured speaker at BrandsConf, BlogWorld, CMS Expo, SMX East, and many other events. In addition to being the co-founder and CEO of DragonSearch, an online marketing agency based in New York City, Dragon is a columnist for Marketing Land and Social Media Monthly.