3 Case Studies on the Power of Social Metrics

In a world where digital natives switch screens 27 times per hour, the data that trails can be overwhelming. Most monitoring tools deliver great data, but the insight comes from you as the executive. Looking at Netflix, DIRECTV and the beer industry on Facebook, Susan Etlinger proved how beneficial sifting through social noise to gain actionable insight can be.

You can view the whole webinar here.

Qualitative social data measurements are essential to providing context, but make sure the process is rigourous #pivotcon

When Netflix announced their decision to separate their business into different DVD-only and streaming divisions last year, there was a digital uproar. Within a few days, Reed Hasting’s blog announcement had over 24,000 comments. Twitter itself housed over 200,000 reactions to the news.

The graph below shows how Netflix’s decision was reflected on Twitter, courtesy of Crimson Hexagon. Negative sentiment is at 65% compared to a meager 21% positive rating. The data shows 27% were strong in changing their business with Netflix and either “Plan to leave Netflix” or “Goodbye Netflix, Hello Redbox”. 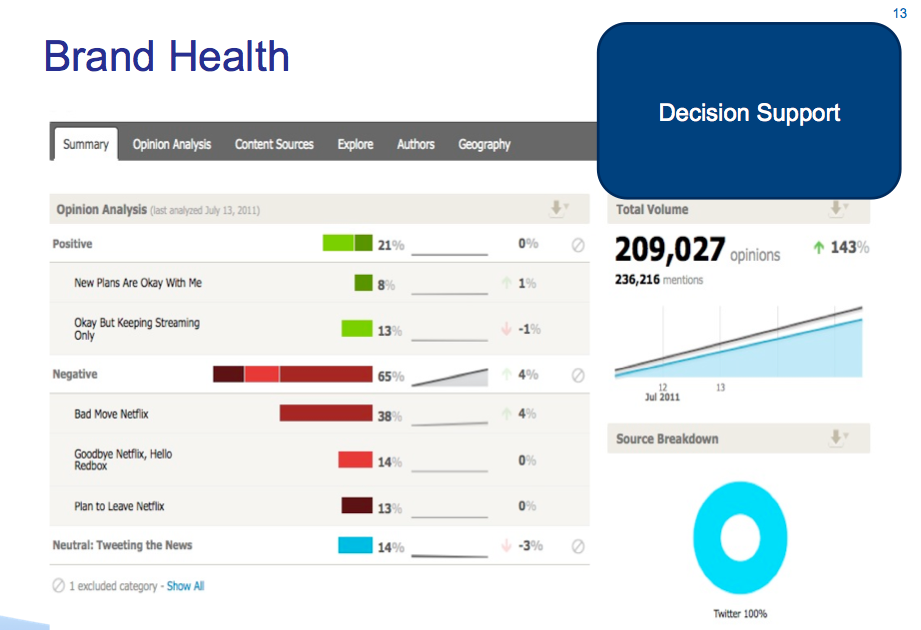 Which raises the question, is there actually a way to correlate what people say on Twitter and what they do in real life? Can brands use Sentiment analysis to shed light on people’s reactions preemptively?

Sentiment analysis may be notoriously inaccurate, but tracking it for long periods of time can bring actionable insight. #pivotcon

Susan recommends at least 6 months for data tracking to truly analyze sentiment. A one-off measurement of sentiment means nothing, but the subtle changes in a company’s data over time can be beneficial. Especially in cases like Netflix, where customers are threatening to leave or “boycott”, one must compare the current volume of these statements to a year before as well as to competitors.

Within a month, Netflix lost about 800,000 DVD only subscribers. 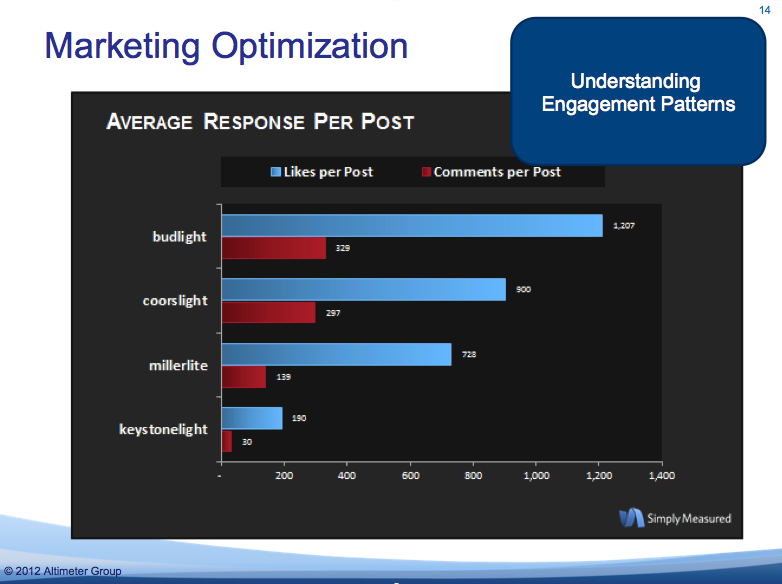 In an analysis of the beer industry using Simply Measured, it’s clear that Bud Light beats out competitors in the realm of Facebook Likes. Yet with a closer look, you can see that Coors Light has the same amount of comments as Bud Light does. In fact, when comparing the “comments per like” for both, it seems Coors Light truly excels in Facebook page engagement. Susan claims “Like” as more of a lightweight engagement and “Comment” as a heavyweight engagement.

If you were a brand in the beer industry, you would then ask your Social team “What is Coors Light doing that are making fans comment more per like, than any other beer?”. This type of granular competitor analysis can help brands improve their own Social tactics and tricks.

Let’s keep spreading the news….Viacom Channels are back on DIRECTV & with streaming content coming soon

When DIRECTV’s service falters, the cost of dealing with individual customers runs high. Any brand that has traditionally offered large volumes of support through a call center can take a page out of DIRECTV’s Social media strategy.

DIRECTV has made it a point to understand whether people say things first on Social media before calling into support. Comparing the cost of a call center dial-in to the cost of pre-emptive tweets, Social takes the cake. Monitoring Social channels lets them resolve service issues before they become critical. “If we can identify broadcast problems in Social channels quickly,” Miller, Director, Social Media Support Strategy, says, “we can detect the velocity of an issue, keep customers informed, and help customers both on and offline. Social is our early warning system”.

DirectTV uses Social media to see where outages are happening before the calls come in to CS. #pivotcon #webinar

Using these three case studies and more, Susan was able to prove any company could benefit from some level of Social data analysis. You can download the slides, or watch the full replay.