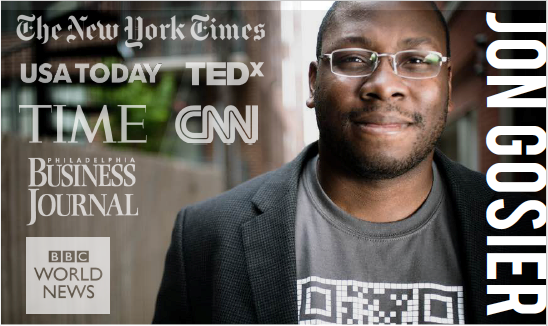 Jon Gosier is a serial tech entrepreneur and venture capitalist working at the intersection of data science and outcome driven user experience. The 34 year-old tech innovator and investor is based in Philadelphia, PA.

Gosier developed a highly successful model for inclusive investing which allowed middle-class individuals to invest in startups. In 2014, he co-founded Third Cohort Capital with fellow alum of the Goldman Sachs 10,000 Small Businesses program in Philadelphia. Gosier is revolutionizing other areas of venture capital as the founder of Cross Valley Capital and partner at Rokk3r Labs in Miami. He is also a huge advocate for investing in tech companies in emerging markets through his Appfrica Fund.

In his career as a data scientist, Gosier spearheaded big data projects for various multi-national organizations. His technologies have been deployed by groups like the US Department of State, the US Army, the United Nations, the Red Cross, FEMA, the Government of Canada and the Kenyan disaster response company Ushahidi to name a few

In 2014, Gosier gained wide recognition for his TED talk on “Trickle-Down Techonomics,” which explored the unintended consequences of technical innovation and the responsibility he feels innovatorshave to design products that yield better social outcomes in addition to great features. Gosier was listed as one of “The New Faces of Black Leadership” by TIME Magazine in 2015. He has received similarly distinguished honors from Black Enterprise Magazine, Business Insider, IDEO and The Economist. His many technical innovations include MetaLayer (a Comcast backed big data startup he co-founded), Open SIM Kit (a technology for mobile phones that ensured communication channels could be maintained during crisis events) and Predictive Pop (which uses data and analytics to create new monetization strategies for the music industry). Gosier has received numerous awards for his work including the Knight News Challenge (in 2011, 2013 and 2015), a Harvard Initiative for Global Health grant, and the TED Senior Fellowship