Have you seen the recent ads from UPS? Be careful, because if you do you just might be singing their jingle all day. “Tagged and scanned, tracked and traced, that’s logistics.” Check any of UPS’ social media channels and you will find interesting, regularly updated content that intelligently weaves in logistics like this:

But their marketing mastery doesn’t stop there, evidence of UPS Social Media success trails well into the deep metrics relative to competitors. In terms of raw fans, UPS has a slight edge over arch rival FedEx, and dwarfs the likes of USPS and DHL. 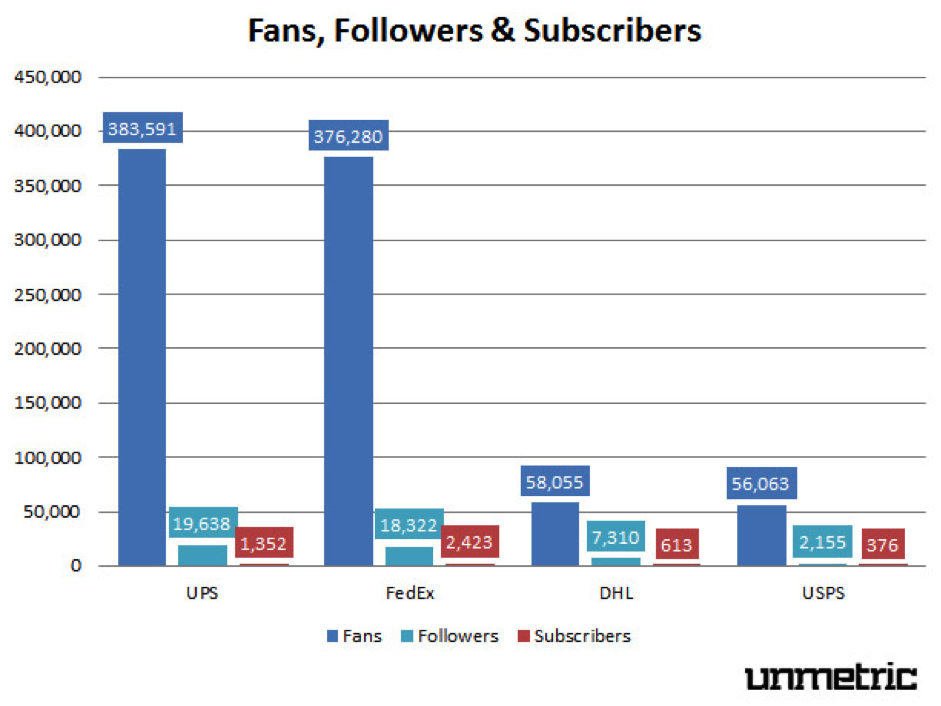 UPS leads the logistics companies when it comes to content creation, and are the most prolific on Facebook, Twitter and YouTube. Each day, they post two Facebook posts and send out 10 tweets on Twitter. On average, they upload two videos every three days. DHL does not appear to have a Twitter strategy in place at the moment, doing just one tweet on their main account in the last 30 days. However, DHL are maximizing their sponsorship of Manchester United using YouTube by uploading plenty of videos about their work with the club. USPS has a relatively high growth rate, which is all the more surprising when you see how little content they are posting compared to the other companies in this sector. 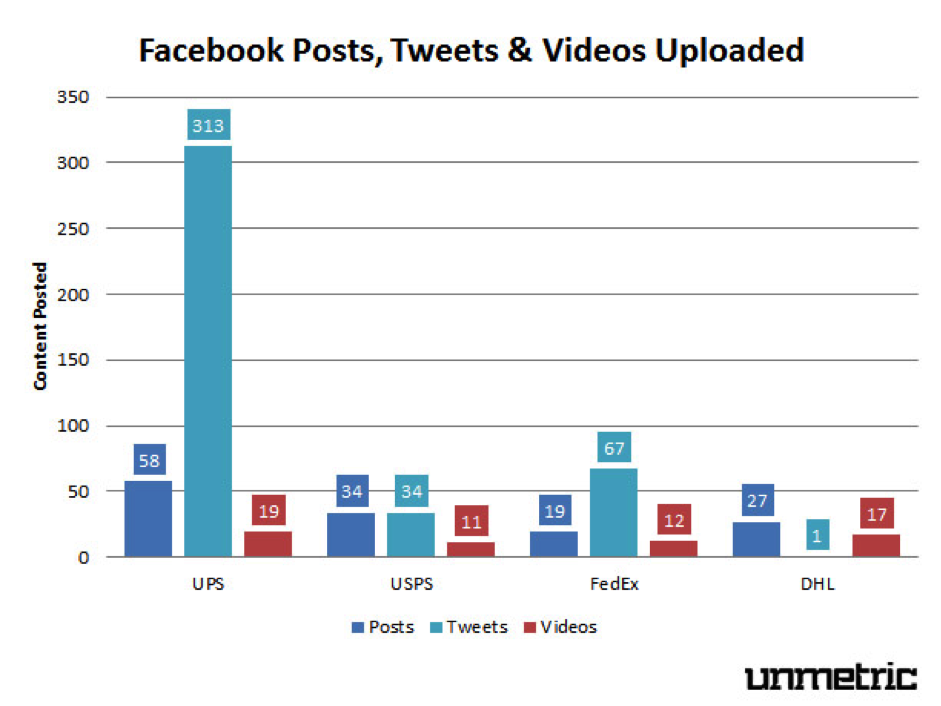 Using the Unmetric Engagement Score, which is based on the number of Likes, Comments, Shares and estimated impressions each post gets, we are able to calculate a score for every post. On average, each UPS post scored 472, which is nearly six times higher than competitor DHL. In the time period we looked at, FedEx didn’t manage to connect very well with their fans compared to the other three logistic companies.

We also looked at the percentage of fans that were engaging with the brands. UPS had a staggering 84% of fans engaged on average. This is truly remarkable because even the most popular brands on social media like BMW, Starbucks, Walmart and Disney usually average a maximum of 10% for engaged fans. DHL, USPS and FedEx engage between 1-4% of their fans which is within the industry average. 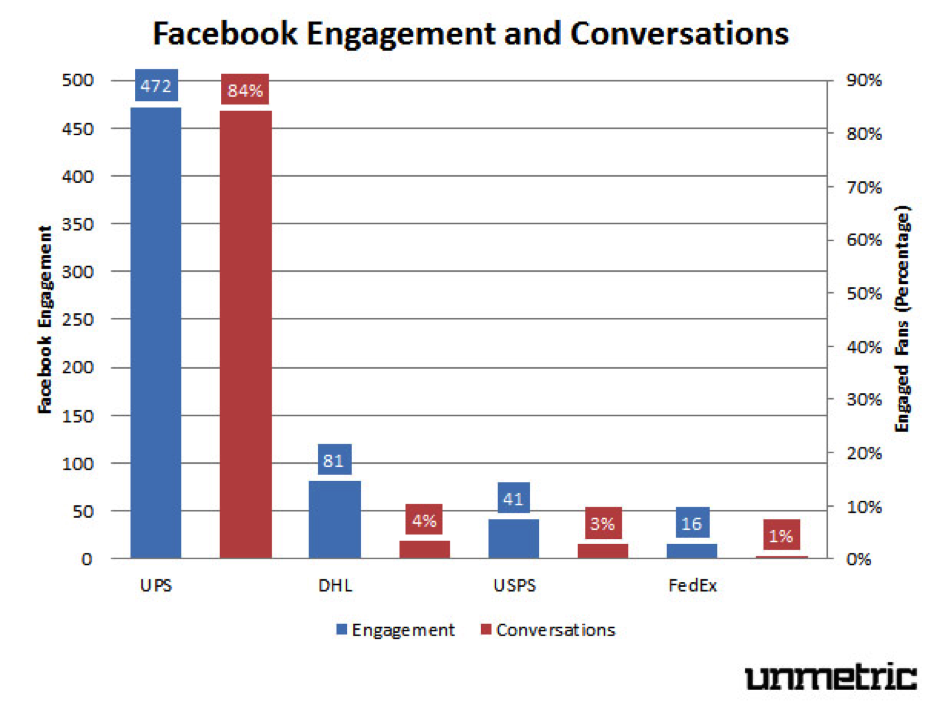 So how is UPS achieving this incredible level of engagement? It’s all down to the content strategy. They have singled out employees who have gone above and beyond the call of duty to help out the community. A photo is posted of the employee being recognized along with a brief inspirational story of what the individual did. In recent months, UPS has posted about drivers that have pulled children from a car wreck, pulled two children and a lady from a burning car before it burst in to flames and tracked down a missing senior citizen with Alzheimer’s.

These heroic stories not only struck a chord with the UPS fans but also with the friends of fans. When fans shared the post, it showed up on their news feed and tens of thousands of people were also able to engage with it. UPS has certainly set the standard when it comes to successfully engaging fans in world of logistics. 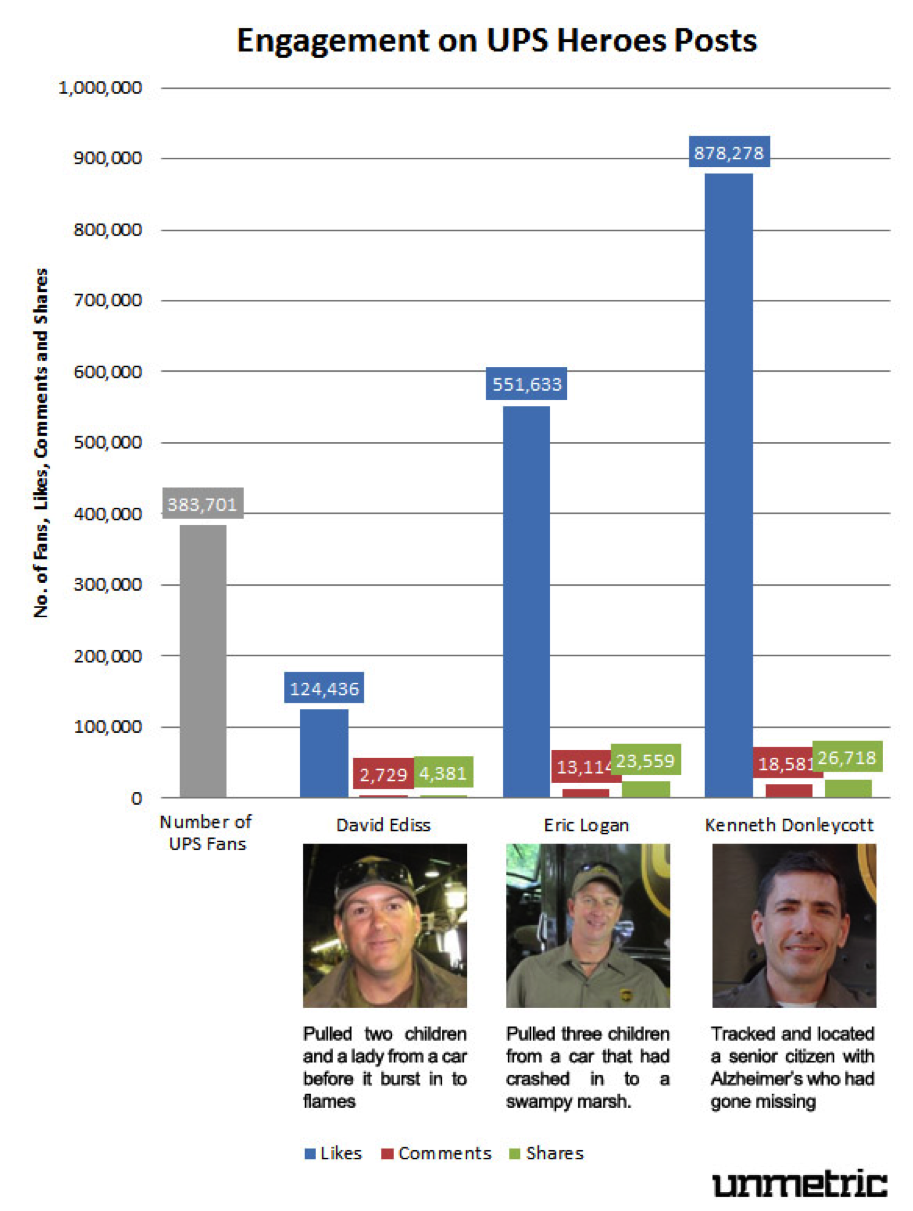 UPS regularly recognizes their employees as part of their UPS Heroes content strategy. Other posts from this campaign have included Reynaldo Alcantara, who resuscitated a puppy, Dorothy Gregg, who volunteers her time to give makeovers to cancer patients and Bruce Gunning, who volunteers up to 60 hours a month in his local community. While they have been among the most engaging posts UPS has done all year, these posts have not attracted the same level of Likes, Comments and Shares as the three posts highlighted in the chart above. One reason that Kenneth Donleycott’s hero story seems to have resonated more than others is that possibly more people were able to connect with the plight of a lost patient with Alzheimer’s. It could easily have been anyone’s parent or grandparent.

Update: The latest in UPS’s Heroes strategy was posted on August 25th and focuses on Eric Mendez who saved a toddler who was drowning in a swimming pool. In only a few days it has become the third most engaging post for UPS in 2012. Proof, perhaps, that recognizing the actions of heroic employees and humanizing the brand, strikes a chord with Facebook fans.

Methodology: This study looked at the data between June 15th and August 15th 2012. Some of the UPS Heroes stories fell outside this date range but this data was not taken in to account for this report.